My father wasn’t much of a golfer.  His somewhat portly stature, amazing strength, and lack of flexibility helped to create a consistent duck hook that was truly a sight to behold.  The interesting and funny thing was that he was a Vice President of the company that made the Titleist golf ball and clubs.  And so it was almost an obligation for all of the men from the office to play some golf on Saturday mornings.  In his view golf had little to do with talent and everything to do with practice.  To him that meant that if someone at the office was a low handicap player then he was spending too much time at the golf course and not enough time at the office. To my father, every activity was an opportunity to find the flaw in a person.  We all have our own unique application of logic. 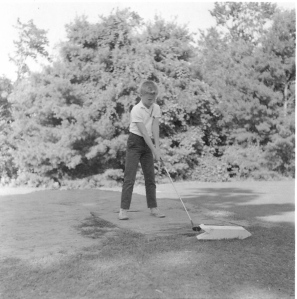 I picked up my first golf club at the Ft. Lauderdale Country Club (FLCC) at the age of 11.  I took 6 months worth of lessons and they all told me I had a beautiful swing and would be very good, as I got older.  I was at FLCC because it was a way that my mother could pretend she was leading her former life.  She had bought a Mercedes, she had bought a house, and now she was a member of FLCC.  I had no clue what was going on but this golf thing was pretty cool.  But I could never get her to take me there to practice.  I loved just hitting balls and experimenting with different ways of doing things.  She had no interest in such things and after we had both finished our lessons she would insist that we go out on the course to play.

As per usual, her membership at FLCC didn’t last.  She had used up the few friends she had made there and it was time to move on.  I had only played golf for about 18 months, had loved every minute of it, but that all ended and we moved on.  I would not play golf again until I was nearly 18 and it’s not a game that you enjoy very much when you haven’t practiced.  As it happened, there were municipal parks nearby where kids (and adults) could find a good selection of activities.  The park near us had 2 brand new tennis courts where a few retired adults would usually play.  I had never played tennis but I thought I would watch for a while.

This was the first time that I realized that I could learn something just by watching.  I sat on the bench at mid-court and watched every detail of how these people played tennis.  I was there every day and I convinced my mother to get me a tennis racquet and a can of balls so I could practice.  I measured the height of the net and got some chalk and drew a line on the brick wall on the back of the elementary school nearby.  The line would be my net and I would hit balls against that wall for hours at a time in the Florida heat.  Since the brick wasn’t completely even I was often treated to a good variety of bounces and I was learning quickly.  Then one day one of the adults couldn’t make it for their regular tennis game.  The three that were there asked me if I wanted to play.  I was hooked.

I played there every day and at some point someone at the park taught me how to serve the ball.  That would be the only lesson I would ever get but it was enough.  I played tennis almost every day for a little over a year until our next move.  But there were no municipal parks near the new place and, like golf, my tennis playing days would have to end for a while.

Because of my involvement in golf and tennis I got to see two very important, and to me very cool events.  The first was a professional golf tournament played in the Ft. Lauderdale area. Since my mother just dropped me off and left, I didn’t really know what to do.  So I just roamed around for a while and tried to see as much as I could.  Then I recognized someone who I had seen on TV, a golfer at the height of his powers.  Up close he looked like a prizefighter in a skin-tight Ban-Lon golf shirt and baggy pants.  In those days there were no rope lines to keep the spectators away and so everyone walked up the fairway with the players.  I let this golfer hit his shot and then I ran up to him and walked along side for a while.

“Hi Mr. Palmer, how are you doing”

Then he walked up to his next shot, hitched his pants, smashed his ball toward the green, and cocked his head to the right as he tried to see its flight.  It was absolutely magical.  I got off the fairway as fast as I could and followed along with him for the rest of the tournament.  I remember it like it happened yesterday even though it was 50 years ago this year.  That was the essence of Arnold Palmer.  He didn’t have to talk to me, didn’t have to be a really nice man, and could have easily been upset that some little kid suddenly appeared next to him; but not Arnold Palmer.

The second event was the US Pro Tennis Championships held at Longwood Cricket Club in Chestnut Hill outside Boston.  Janis had played some tennis and she wanted to take me to see this tournament.  Prior to the 1960’s professional tennis had been dominated by the British and the Americans.  Names like Tilden, Kramer, Riggs, Segura, and Gonzalez were perennial favorites.  Then in the 1960’s it was primarily dominated by the Australians with Laver, Newcomb, Roche, and Rosewall.  They all wore white shirts and shorts, the balls were white, and the racquets were wood.  The sound of a purely hit ball off a wood racquet was unmistakable.  I got to see Rod Laver beat Pancho Gonzalez in the 1964 final.  I didn’t get to talk to any players but it was an amazing display of what could be done on a tennis court.  I would play a Laver Dunlop MaxPly Fort for many years after that.

As usual I took some lessons from these two events.  One was that when you think you are pretty good at something; take the time to watch a professional do it.  You’ll find that you’re probably not as good as you think you are.  And the second was you could be the best in the world at something and still be a really nice person.  I saw Tiger Woods play in the President’s Cup in 2000 and again in 2005 and honestly he was better than Arnold Palmer, Ben Hogan, Jack Nicklaus, (or anyone else) ever dreamed of being.  But on the course he’s not a very pleasant person.  Where Tiger tolerated or often completely blocked out the spectators, Arnold Palmer reveled in their very presence.  Where Tiger revered the trophies and the records, Arnold Palmer revered the people.  Where Tiger seeks the flaw in his opponent, Arnold Palmer looked for the good in everyone.  We all have our own unique application of logic.

The author of "Uphill Both Ways," a thought provoking series of stories about life, family, and growing up.
View all posts by J T Weaver →
This entry was posted in Storytelling and tagged character, childhood, education, family, golf, literature, non-fiction, perseverance, sports, Storytelling, tennis, WPlongform. Bookmark the permalink.