Well, my children this is the one.  This is the story that you have heard at the dinner table countless times, debated by your mother and I as to how this or that happened, and always ending the same way with a smile.  As with all these stories, this is how I saw it happen, and this is what I thought and did.  If you want your mother’s interpretation, get her to write the same story.

Here I was, 33-years old and only now going on my first business trip.  I hadn’t been in an airplane since I was a kid and I was kind of excited, so much so that I didn’t plan things out very well.  I was going to Phoenix in August.  I didn’t bother to actually say that out loud and so I didn’t benefit from that bead of sweat that just appeared on your forehead.  When I landed in Phoenix I got off the plane in my summer blue suit and walked across the tarmac.  It was 118 degrees.  Only when I had driven cross Death Valley in July 1975 in my Vega without AC had I experienced such heat.  I had forgotten all about that.  “But it’s a dry heat” would be the constant calling card from everyone.  “And so is my oven,” would always be my retort.

I was to meet with the people I had spoken to many times on the phone since I started my new job.  There was no real agenda, just a meet and greet, and a little coordination on how we would do things together.  These Phoenix people would not be moving to Boston and so I would be taking over what they had been doing for several years.  After a couple of days we had completed everything and I headed home.  It was in the 80s when I landed in Boston and I felt a little chill in the air.

I was only home for two days and it was time to go to San Francisco.  Again, I was excited to be going back to the city that I had loved so much, and again so excited that I forgot the famous Mark Twain quote.  I packed my summer weight suits and no jackets or sweaters.  It was 70’s and sunny when I landed on August 19th and I was comfortable.  These trips were all 1st class though.  In Phoenix I had stayed at the Pointe Tapitio Resort and lounged in the pool in the evening while people brought me free drinks, nice.  In San Francisco I stayed at the St. Francis in Union Square and I instantly felt at home.  I called Sadako and we had a lovely dinner together.  Now 7 years after I left, she was the Chief Financial Officer at the Bank of Tokyo.  I just smiled, shook my head a little, and congratulated her when she told me.  She never reproached me for not staying even though she knew what the last 7 years had cost me.  I didn’t know it then but this would be the last time I would ever see her.

Monday the 20th was the first day of the conference in Menlo Park.  Two of the guys I had met in Phoenix were also at this conference and in addition to listening to the conference we chatted about general ways to coordinate our business activities.  Generally though, this was a pretty boring conference.  Oracle was only a fledgling company then and they were conducting these informational conferences to drum up additional business.  But they were trying hard to please and the meals they provided were pretty good.  It was finally lunchtime and the three of us went to the large Oracle cafeteria and sat at one of the big round tables that were setup for the conference attendees.

While we were talking a very pretty young woman came up to the table and asked if this seat was taken.  Well, it was an 8-seat table, leaving 5 empty seats!  But we smiled and said sure please join us.  I introduced myself and my two friends and she just said “Hi, I’m Karen.”  We asked where she worked and she told us The National Bureau of Standards in Gaithersburg, MD as a database administrator (DBA).  Well, we were all DBAs so the conversation was much easier after that.  Somewhere in there she shared that the conference wasn’t what she had expected and we all nodded politely.  So after lunch I said that I was planning on a trip to Japan Town in San Francisco that afternoon and would she like to go along.  She said “sure!” and I don’t remember anything about the Oracle Conference after that. 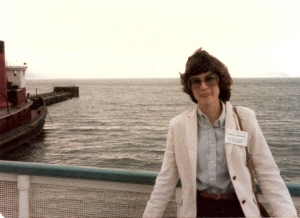 gold and she gave me a slip of paper written in Japanese, told me where to go, and to give the paper to them when I got there.  Karen and I took a cab to Japan Town, I got my ring, and I showed her all the places I had frequented when I had lived in San Francisco 7 years before.  Later she got on a cable car for the first time, nearly fell off before I caught her, and I showed her Fisherman’s Wharf and one of my favorite places, the Cannery Coffeehouse.  That night we were scheduled for a conference dinner on a boat.  Yup, here comes that Mark Twain quote again.  The night wind off the bay with a touch of fog is like nothing else in the world, if only because you never expect it.  We scurried off and bought tourist pullovers and laughed at how ridiculous we looked.

For the next three days, we toured the city together.  I showed her where I used to live, where I worked, and a hundred other places that I can’t remember now.  Along the way she told me she was only 23 and while she was much more mature than that, she really looked 16.  We laughed, held hands, and laughed some more.  Off the lobby of the St. Francis Hotel was a lounge and bar called the Compass Rose (now gone).  After each day we would always end up there.  It was there that we drank and laughed together until 2 or 3 am and never ran out of things to say.  I would tell her stories that were funny, sad, and sometimes thought-provoking (imagine that!) and all the while I had no thoughts at all about my previous 7 years.  Perhaps without realizing it, this woman possessed something very unique and I was completely captivated by it.  There was a curious mixture of complete innocence, raw intelligence, and amazing maturity in this woman who defied her 16-year-old appearance.

We had a great time but it was the 23rd and time to go.  There were flights to catch and former lives to lead.  Still, I would spend a lot of time on the long flight home thinking about this pretty young woman.  I remember thinking that I had been in San Francisco again, I was smiling all the time, and Karen was an integral part of it.